Blog
You are here: Home / Blog / Uncategorized / The Mode of Prayer (Salaat) for Women 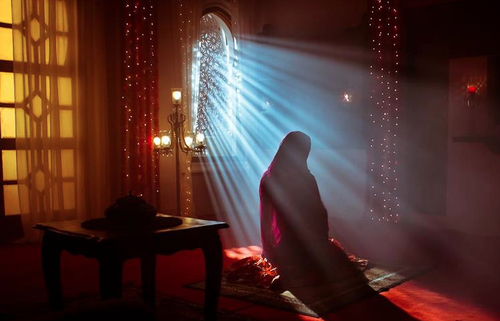 Prayer to be offered by women differs from that of men only in the practical manner of its offering and not in the spiritual sense. The Prayer times, the supplications, the number of prostrations, bows, etc., do not differ. The difference in the physical aspects of Prayer arise from the fact that women’s physique differs from that of men, and follow from the commands which Allah (The Supreme) has stipulated for them in the Holy Quran and through the Hadith of the Holy Prophet Muhammad Sallahu Alaihi Wasallam. Most differences relate to clothing, concealment of body, posture and concealment of voice.  Prior to listing the differences in women’s mode of Prayer, we provide references from the Holy Quran and Hadith which are the PROOFS of, and form the main bases of these differences:

A. From The Holy Quran – Regarding Concealment Of The Body

1. [Surah Noor Verse 31] And command the Muslim women to keep their gaze low and to protect their chastity, and not to reveal their adornment except what is apparent, and to keep the cover wrapped over their bosoms; and not to reveal their adornment except to their own husbands or fathers or husbands’ fathers, or their sons or their husbands’ sons, or their brothers or their brothers’ sons or sisters’ sons, or women of their religion, or the bondwomen they possess, or male servants provided they do not have manliness, or such children who do not know of women’s nakedness, and not to stamp their feet on the ground in order that their hidden adornment be known; and O Muslims, all of you turn in repentance together towards Allah, in the hope of attaining success.

2. [Surah Ahzab Verse 59] O Prophet! Command your wives and your daughters and the women of the Muslims to cover their faces with a part of their cloaks; this is closer to their being recognised and not being harassed; and Allah is Oft Forgiving, Most Merciful.

B. From The Holy Quran – Regarding Concealment Of Voice

3. [Surah Ahzab Verses 32 – 33] O the wives of the Prophet! You are not like any other women – if you really fear Allah, then do not speak softly lest the one in whose heart is a disease have any inclination, and speak fairly. And remain in your houses and do not unveil yourselves like the unveiling prevalent in the times of ignorance, and keep the prayer established, and pay the charity, and obey Allah and His Noble Messenger; Allah only wills to remove all impurity from you, O the People of the Household, and by cleansing you make you utterly pure.

C. From The Hadith – Regarding Difference In Prayer Positions

4. Abdullah ibn Umar (may Allah be well pleased with him) narrates that the Holy Prophet

said, ‘When a woman sits in Sajdah by putting one thigh upon the other (i.e. close to one another) and at the time of Sajdah (prostration) her stomach touches her thighs and she also takes full consideration of Hijaab, then Allah Taãla looks at her and says to the angels, ‘Bear witness that I have forgiven her.’ (Baihaqi, Kanzul Ummaal)

5. Once the Holy Prophet

saw two women offering Prayer and he said, ‘When you (women) make Sajdah (prostrate) then let the limbs of your body touch one another and make them touch the ground.’ Surely in this (prostration posture) women are not similar to men.’ (Masaail Abu Dawood)

6. Wail ibn Hajar (may Allah be well pleased with him) said that the Holy Prophet

taught him to offer Prayer and he said, ‘O ibn Hajar! When you begin your Prayer then lift your hands up to your ears and show the women that they should lift up to their chests.’ (Tabarrani)

7. Abdullah ibn Umar (may Allah be well pleased with him) was once asked on how women used to offer Prayer during the time of the Holy Prophet

. He replied, ‘First they used to read Prayer cross-legged, then they were commanded to cling to themselves,’ (Jaami al-Masanid).

D. From Hadith – Regarding Concealment Of Voice During Prayer

8. Narrated Abu Huraira (May Allah be well pleased with him), The Holy Prophet

once said: “The saying ‘Sub Han Allah’ is for men and clapping is for women.” (If something happens in the prayer, the men can invite the attention of the Imam by saying “Sub Han Allah”. And women, by clapping their hands).(Bukhari)

DIFFERENCES BETWEEN MEN’S AND WOMEN’S PRAYER

1. Concealing the body (Satr-e-Aurat) – that is to conceal/cover the necessary parts of the body. For men, this consists of the body between the navel up to and including the knees. For women this consists of the entire body, except the face, hands and soles of the feet. Women must hide their faces from strangers whilst not in Prayers. Wearing clothes that are so thin that body colour is exposed will make the Prayer void. Similar is the case of the head scarf if the shine of hair is revealed. In fact, wearing such clothes is prohibited even outside Prayer. Before beginning Prayer the woman should make sure that (other than her face, palms and the soles of her feet) her entire body is properly covered with opaque clothes. If she offers Prayer in thin clothes which reveal the colour of the skin or the shine of her hair, it will render the Prayer void. It is obligatory to also hide the neck, ears, hair-locks hanging from the head, and the wrists.

2. If any part of the body (other than her face, palms and the soles of her feet) is exposed up to one fourth of its area, and she proclaims the “Takbeer Tahreemah” (“Allahu Akbar”) without hiding it, then the Prayer will be deemed to have not started at all. If one fourth or more of it gets exposed during the Prayer for a time in which “Subhaan-Allah” can be recited thrice, it will render the Prayer void.

3. While saying “Takbeer Tahreemah” (Allahu Akbar) a woman should raise her hands only up to her shoulders (and not up to the ears) and should not take them out of her cloak.

4. In the Qiyaam (standing position), she should place her left palm on the middle of her chest and the right palm over the left.

5. While bowing, she should only bow a little, enough for her hands to touch her knees, without holding them. The fingers should be kept straight. She should stand with her knees slightly bent, and her arms close to her body.

6. She should perform the prostration with her body drawn together i.e. she should keep the abdomen joined with the thighs, the thighs with the calves, the shins with the ground, the arms to the sides and the wrists spread on the ground. Further, instead of keeping the feet upright, both feet should be spread out towards the right.

7. While in Qaadah (sitting position), instead of keeping the right foot upright, both feet should be slid out towards the right, with her sitting on the left foot.

1. Women are exempted from offering Prayer whilst in state of impurity (due to menses or childbirth).

2. Women should take extra care during “Wuzu and Tayammum” by moving ornaments (such as rings) in order not to leave the area below them – whereas nail polish should be totally removed.

3. If several persons are praying in the same room, women should pray behind the men. They should not stand in line with the men.

4. Women should offer their five daily Prayers, Taraweeh and Witr individually. It isMakrooh Tahreemi for them to offer Prayer with congregation. (Shaami Vol.1). A woman cannot be a leader (Imam) in any congregational Prayer.

Raising your Child to be a Muslim
Scroll to top