Blog
You are here: Home / Blog / Uncategorized / Raising your Child to be a Muslim 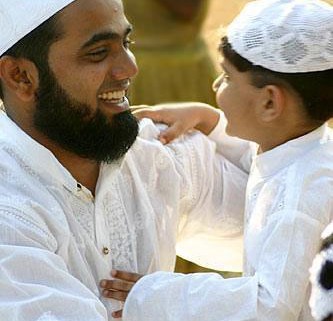 It is true that the first learning center for a child is the mother’s lap. The mannerisms of the parents are reflected in the children.

It is the duty of parents to be an example to their children and advise them. Allah (the Supreme) tells us of the advice that Syedna Luqman gave to his son:-

And remember when Luqman said to his son, and he used to advise him, “O my son! Never ascribe anything as a partner to Allah; indeed ascribing partners to Him is a tremendous injustice. [Luqman 31:13]

Then after some verses, the advice continues:-

O my son! If the evil deed is equal to the weight of a mustard-seed, and even if it is in a rock, or in the heavens, or wherever in the earth, Allah will bring it forth; indeed Allah knows all the minutest things, the All Aware. O my son! Keep the prayer established, and enjoin goodness and forbid from evil, and be patient upon the calamity that befalls you; indeed these are acts of great courage. And do not contort your cheek while talking to anyone, nor boastfully walk upon the earth; indeed Allah does not like any boastful, haughty person. And walk moderately and soften your voice; indeed the worst voice is the voice of the donkey. [Luqman 31:16-19]

We can recall not too long ago in our Muslim culture that all grown-ups in the community would take the role of guides for the youth. No child dared to misbehave in front of elders in any gathering. All the elders held enough authority that they could discipline the child without having to face the wrath of the parents as is the case today. As a result, children tend to misbehave and disrespect elders because they no longer fear being disciplined by anyone besides their parents, and that too is seen little.

Parents realize it too late – that what they thought was giving ‘freedom’ to their children was in fact destroying them. Being affectionate to your children is one thing but to let them to do anything as they wish, is not affection – rather it is harmful for the child. This is the result of the parents’ forgetting their duty of teaching the child. More often the television takes the place of the parent and it is from here the child gains much of his/her ill-mannerisms. Let these words be a reminder and a word of caution.

When children are able to speak a little, teach them the name of Allah. Before, mothers would put their children to sleep by chanting “Allah – Allah”, but now it is by shamefully playing the music on the radio!

When children are mature do not do anything in front them which will ruin their mannerisms because they tend to copy these acts. They do whatever they see their parents doing. Never argue with your spouse in front of them because this puts a lot of stress on children and causes them to think that they are the cause of the argument. Never curse your children.

Offer the Prayers in front of them, recite Quran, take them to the mosque with you, and tell them stories of our pious predecessors as they like to listen to stories very much. Hearing stories with lessons and morals will increase their good habits. When they are a little older, teach them the Five Declarations (Kalemat), Concise Faith (Imane Mujmal), Detailed faith (Imane Mufassal), and then teach them how to offer Prayers (Salah).

Put them under the guidance of an Allah-fearing, pious scholar (Aalim) or Qur’an Memorizer (Hafiz) – definitely holding right beliefs & from creed of Ahle Sunnah – to acquire the knowledge of Islam & the Holy Qur’an – so they can know more of the beautiful religion to which they belong. Teach them the rules & practices of bathing, ablution & prayer.

If Allah gives you proper guidance, try to make your children Islamic Scholars or Memorizers of the Holy Qur’an. A Memorizer (Hafiz) will get three generations forgiven and a Scholar (Aalim) will get seven generations forgiven (on the Day of Judgment). It is baseless to think that a scholar has no source of livelihood. Know that one does not earn more than what is destined by acquiring worldly knowledge; one will get only what the Almighty Provider (Razzaq) has written for him.

Teach your children simplicity and do not expose them to materialism. Teach them the value of doing their own work. Send them to college, make them judges, make them doctors or to adopt any successful and halal career in this world – but make them such that they carry on these professions as honest Muslims who know their religion.
The acknowledgment should be placed in a writing helper footnote at the bottom of the first page of the paper or chapter
http://virtualislamiclearning.com/wp-content/uploads/2014/12/balovat.jpg 500 333 Temp User http://virtualislamiclearning.com/wp-content/uploads/2014/12/logo_vil-300x116.png Temp User2014-12-18 13:48:052018-07-16 12:16:12Raising your Child to be a Muslim

The Mode of Prayer (Salaat) for Women

Wonders of Salaat with Jama’at
Scroll to top